Why Everyone Loves Snoopdogg

Snoop’s name comes up in GOAT conversations less and less these days, but people ought to appreciate him more because he consistently made great music even once he was past his prime. He was once unquestionably hailed as the Best Rapper Alive. Unfortunately, just like LL Cool J and Ice Cube, Snoop's rap legacy has become tainted by his general celebrity. After spending the ’90s watching how keeping it real could go wrong in the form of murder cases, studio beatdowns, and having a close friend murdered, Snoop eventually transitioned from being dangerous to being marketable. He started acting, and while he wasn’t great, he had memorable roles in films like 2001’s Training Day and 2004’s Starsky & Hutch. He popped up in video games like True Crime: Streets of L.A. He even had an underrated sketch comedy show, Doggy Fizzle Televizzle.

That’s why Snoop isn’t so much a rapper these days as he is an entertainer. He’s also a hip-hop ambassador. When a Nickelodeon show or a Bollywood director needs a rapper who can broadly appeal to many people, they call Snoop. He’s willing to shill out for literally anything, whether it’s Hot Pockets or MoneySuperMarket. But it’s hard to stay mad at him. Here’s a guy who really once was one of America’s most wanted, someone who frightened middle America and the likes of C. Delores Tucker, but now daps up John Kerry and helps contestants on The Price Is Right. Still, I genuinely fear asking a teenager what Snoop Dogg is famous for—I’m sure they’ll say anything other than rapping. Nowadays, more people probably know him for “fo shizzle” than “Tha Shiznit.”

It’s not their fault. In the past few years, Snoop’s biggest moments had little to do with music. His charisma and natural charm have allowed him to branch out into other arenas, but it’s undermined what he is at heart: an incredible rapper. Snoop has always been armed with an instantly recognizable voice, one that cuts through tracks with effortless cool. His voice—the only instrument a rapper needs—is supplemented with a flow that’s as smooth as syrup and always perfectly in the pocket. It’s that fluidity in his delivery that’s made him so everlasting. Who knows what he means when he says, “Writing my rhyme, trying to get intellectual/Directing the weather, makin’ my negative records more intellectual”? But it hardly matters. It sounds good so his lyrical shortcomings become forgivable because he can flow forever. It’s easy to believe collaborators like Lady of Rage and the D.O.C. when they claim he essentially freestyled all his verses in the ’90s that are now considered rap classics.

But for all of Snoop’s ’90s prowess, much of his early career went to waste. Dr. Dre’s The Chronic and Doggystyle are all-time classics, but Snoop’s follow-up, Tha Doggfather, is an all-time album fail. Tha Doggfather, and Snoop’s subsequent ’90s output, serves as a warning to any newly minted rap star that the rug can easily be pulled from underneath you by things beyond your control. Death Row fell apart in the mid-’90s once Dre left the label, 2Pac got murdered, and Suge got locked up on a probation violation, leaving Snoop as, as VIBE declared, the last man standing. Master P and No Limit helped him get his career back on track when he signed after Death Row, but 1998’s Da Game Is to Be Sold, Not to Be Told and 1999’s No Limit Top Dogg aren’t exactly great albums. However, the latter did feature a return to form when he hooked up with then up-and-coming West Coast rapper Xzibit, Nate Dogg, and reunited with Dr. Dre for “Bitch Please.” Coupled with Dre’s 2001, things were looking bright for Snoop heading into the new millennium. 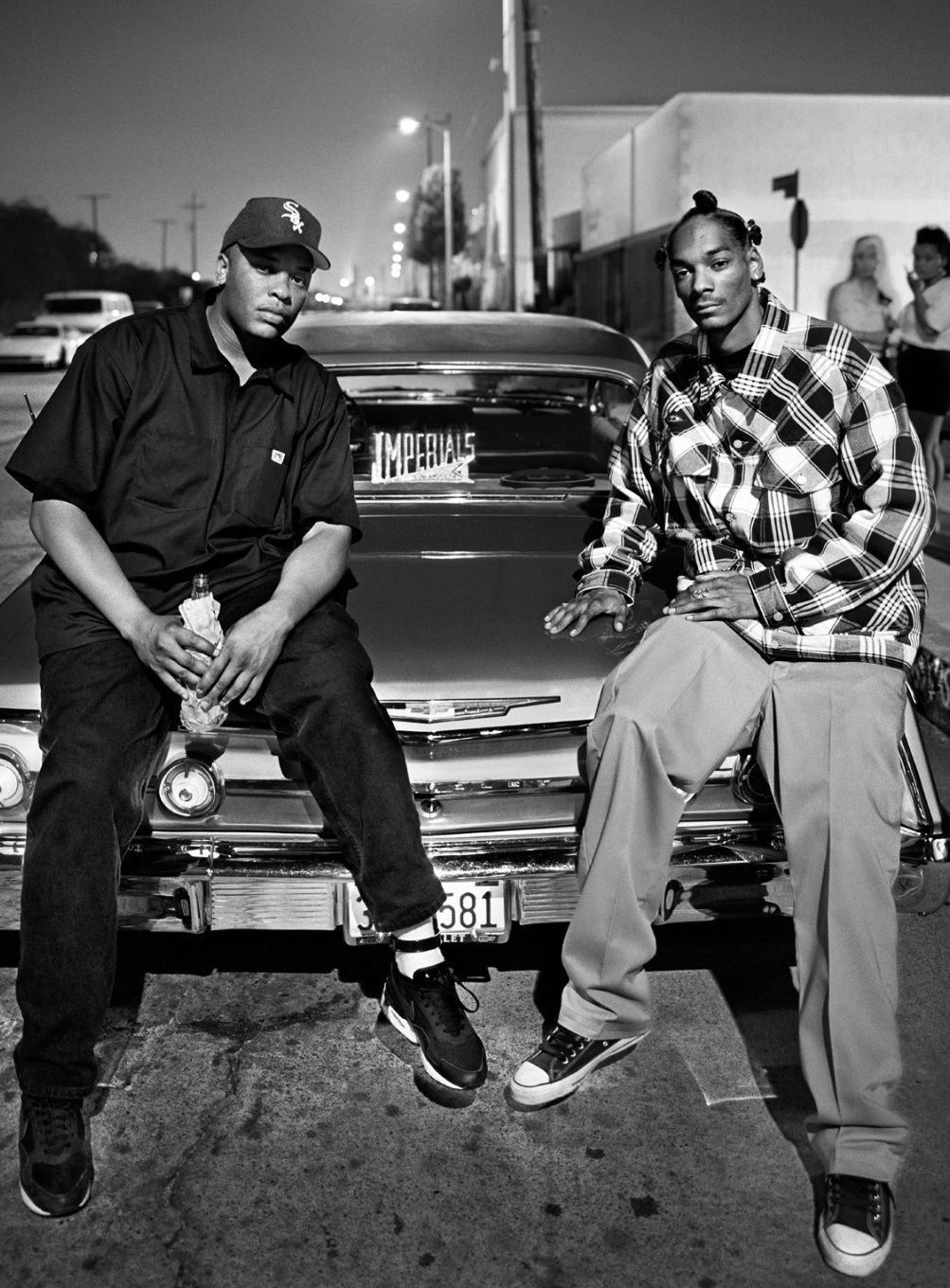 With “Bitch Please,” Snoop began a run of routinely excellent singles. His next album, 2000’s Tha Last Meal, was named so due to it being Snoop’s last on No Limit. The lead single, the Timbaland-laced "Snoop Dogg (What's My Name Pt. 2)," was good, but the Dr. Dre-produced “Lay Low” was great. His next album, 2002’s Paid tha Cost to Be da Bo$$, was his first release on Capitol/Priority and his own label, Doggystyle. Finally, Snoop was in control of his own destiny. The album saw him begin his fruitful relationship with the Neptunes. They teamed up for “From tha Chuuuch to da Palace,” but Pharrell and Snoop’s undeniable chemistry hit it out of the park with “Beautiful”—a song that helped transition Snoop from a straight-up gangster to a ladies’ man.

But none of that could have prepared us for the unadulterated brilliance of R&G’s first single, “Drop It Like It's Hot.” The song’s space-aged minimalism remains one of the best Neptunes' beats—every bit as good as the immortal loops of Clipse’s “Grindin’.” In fact, 15 years later, with DJ Mustard dominating urban radio by doing more with less and Pharrell enjoying new career heights, it’s safe to say that “Drop It Like It’s Hot” is timeless enough that if it dropped today it’d still have a decent shot at topping the Billboard Hot 100 just like it did a decade ago. “Drop It Like It's Hot” is one of the best rap songs of the 2000s while "Gin and Juice" and "Nuthin' but a 'G' Thang​" are two of the best rap songs of the '90s—making Snoop one of the few rappers to make classic songs decades apart.

The rest of the singles from R&G don’t slouch either. There’s the Justin Timberlake- and Charlie Wilson-assisted “Signs” as well as “Ups and Downs.” Plus album cuts like “The Bidness,” “Pass It Pass It,” and an on fire appearance from 50 Cent on “Oh No.” At the center is Snoop’s chameleon-like ability to slip into any suit: pimp, gangster, pop star, stoner, whatever.
The momentum kept going on Snoop’s following release, Tha Blue Carpet Treatment—the best Snoop album of the 2000s. As usual, it isn’t without it’s clunkers—did we really need a song about Snoop’s son’s football team called "Beat Up on Yo Pads”?—but has plenty to make up for it. The underappreciated “Vato,” the all but forgotten “That’s That Shit” with R. Kelly, and of course, a reunion with Dr. Dre topped with a random appearance from D’Angelo on “Imagine.” Snoop is locked in enough on the project that he lets loose on songs like “Think About It” and the silly but fun “Which One of You.”

Just when you thought he was out of ammo and maybe out of touch, he came back with “Sexual Eruption” (the radio version was called “Sensual Seduction”) in 2008. The song cleverly took advantage of the Auto-Tune craze of the late aughts, but it still fit perfectly with Snoop’s image and love for George Clinton and black ’70s culture. (The video was pure brilliance.) The Ego Trippin’ album wasn’t nearly as good as his two previous releases, but he still closed out the decade with 2009’s excellent "I Wanna Rock.” With Malice n Wonderland, he finally made an album that wasn’t an obnoxious 20 tracks long.

Sadly, Snoop hasn’t done anything since that was nearly as good. He still managed to hop on hits like Katy Perry’s “California Gurls” and team up with Wiz Khalifa for “Young Wild and Free;” scored another hit with Jason Derulo’s “Wiggle.” back in 2014 [Sigh.] It’s not his best work, but few rappers who debuted in the early ’90s still manage to make hits. You’re better off appreciating all the great things Snoop has done over the years. If you add up Snoop’s output in the 2000s, you’ve got a greatest hits collection to rival any rapper’s. Even if none of his albums were quite masterpieces, he was still a master at work.

Snoop was so prolific in the 2000s that along with eight solo albums, he also released four albums as part of groups like 213 and Tha Eastsidaz. For the purposes of length, this article focuses on Snoop's solo work.

Snoop Dogg has been featured on more songs than any other rapper.