The Lyrics That Defined 2018

A snapshot of the year through the lens of artists’ pens 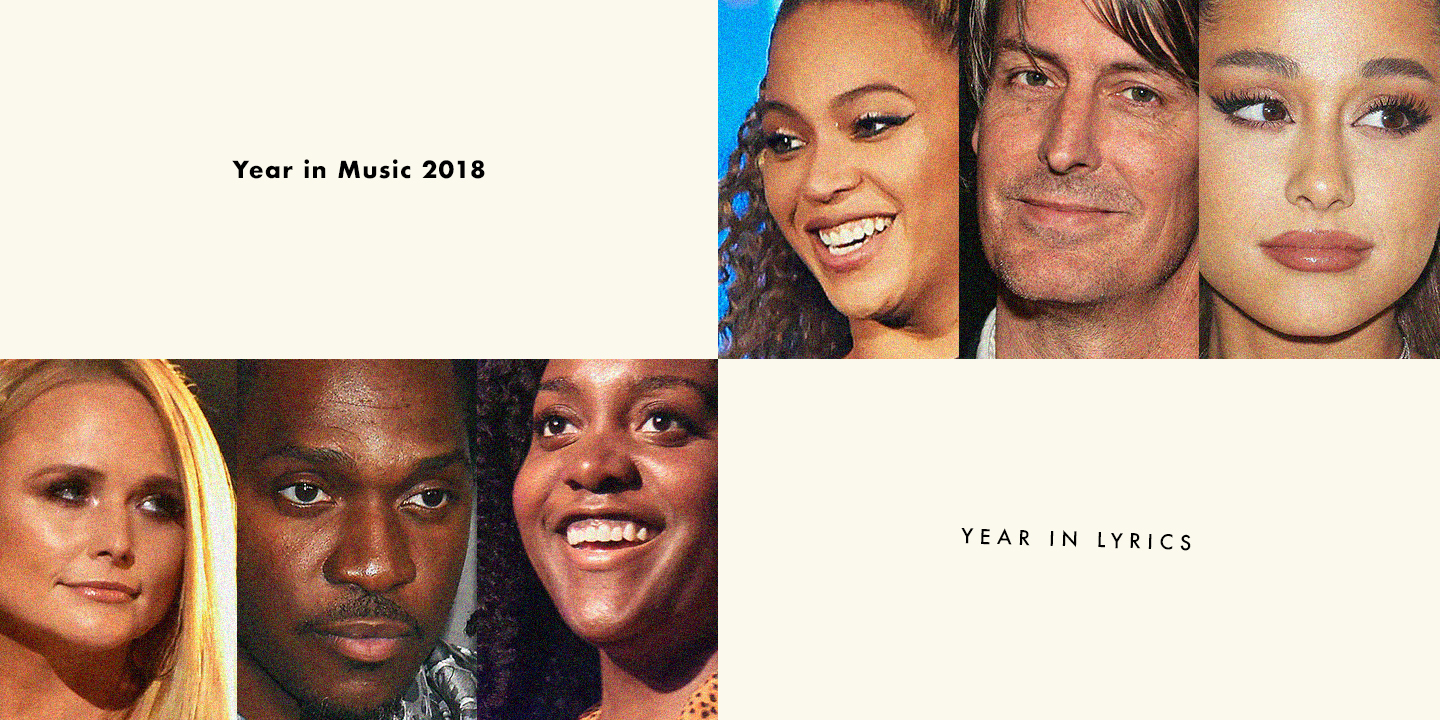 Pusha-T cosplayed Jerry Springer. Ariana took the high ground. And pretty much everyone, from Stephen Malkmus to Cardi B, took men to task. In a dramatic year, musicians held nothing back. These were some of their most memorable lines.

Of all the exceptionally hellish things that happened this year, one of the worst was Kanye West and Donald Trump becoming legitimate homies. The 1975 figured out the best way to distill this dystopia: by wholesale lifting a tweet from the president himself. As an exasperated Matty Healy yells “Thank you, Kanye, very cool” at the song’s climax, it stands as a tiny rebellion against the bullshit of 2018. –Michelle Kim


“You are hiding a child/Let that boy come home”

PUSHA-T, “THE STORY OF ADIDON”


Midway through “The Story of Adidon,” Pusha-T’s thorough annihilation of Drake, he drops the bomb. “You are hiding a child,” he says, dragging out each word to make sure everyone hears him clearly. Pusha could’ve just stopped there and made rap blog headlines, but instead he goes on to imply that Drake is incapable of stepping up as a father: “Let that boy come come.” With his nonchalant tone, Pusha sounds like he could be offering a no-brainer piece of parenting advice; the line seems extremely petty because he acts like Drake is incapable of following it. –MK

Stephen Malkmus’ most gentle track in years could be a lightly jangling Pavement outtake, its slick rhyme of “blushin’” and “Robitussin” burning eternal. But “Middle America” slotted perfectly into this chaotic year, too, offering a glint of self-awareness in an area that thoroughly lacked it. That this line proved a prognosticator for 2018—“Middle America” was released in February, before the full brunt of steamrolling boors—was less pleasant, but at least we knew Malkmus was on our side. –Stacey Anderson

ARIANA GRANDE, “THANK U, NEXT”

In a year devoid of all graciousness, Ariana Grande was a bright spot. She lost one of her exes and was somehow blamed for it by trolls. She went through 2018’s most public breakup. And then she thanked her past loves for making her the strong woman she is today. It all hinges on this delicately sung line, which Us Weekly devotees are still trying to parse. Only Ari knows the truth, and she’s too wise to tell. –SA

“My pussy wrote a thesis on colonialism”

Noname opens her album Room 25 with a freeing stream of consciousness that’s too deft to be freestyled. She cracks self-reflective jokes and questions those who think she really can’t rap, landing somewhere between the two with her instantly iconic “colonialism” line. After bragging about her own sexually transmitted genius (“Fucked your rapper homie, now his ass is making better music/My pussy teachin’ ninth-grade English”), the artist born Fatimah Warner drops this flex worthy of its own doctorate. –SA

“Without my legs or my hair/Without my genes or my blood/With no name and with no type of story/Where do I live?”

“Immaterial” is the centerpiece of SOPHIE’s OIL OF EVERY PEARL’s UN-INSIDES, a transhumanism-inspired declaration of independence from bodily constraints. Lifted by Cecile Believe’s helium vocals, the song’s lyrics home in on a slippery notion of the self: How does one exist without identifying features or backstory? There’s no tidy explanation for a question this heady, but the track’s effervescence suggests that what you feel matters most. –Eric Torres

In 2018, no one captured the desperation of romantic loneliness quite like Mitski, and never better than in this line from “Nobody.” It’s a seeming counterpoint to self-help tomes and practical advice that suggest these matters are within our control. Accomplishments and open-heartedness be damned, a fully realized life might not be enough to bring you what you truly want: someone else. –SA

“Leave his texts on read, leave his balls on blue”

Behind every great woman is a man celebrated for half as much. So tip your hat to Cardi B and SZA for leveling the playing field, if only for a few minutes, on the glorious closing track of Invasion of Privacy. “I Do” is a spree of smirking rejoinders to dudes who think they have the power. As this dynamic duo preens and sneers with the camaraderie of great friends, they set a standard for themselves and their listeners, too: If you’re lucky enough to get my attention, do not waste it. –SA

“If I gave two fucks about streaming numbers/Would have put Lemonade up on Spotify/Fuck you, fuck you, you’re cool, fuck you”

Breaking the fourth wall, Beyoncé uses this quick aside from her album with JAY-Z, Everything Is Love, to dunk on the streaming service most likely playing this song (post-embargo, of course). Cultural ubiquity means being powerful enough to scoff at one of your main vessels for it, while at the same time pushing a competitor. This line alone was worth registering for another free trial of Tidal. –SA

“My black is beautiful but I’ll still shoot at you”

Vince Staples’ FM! feels like it was beamed in from a mid-’90s pirate radio station playing exclusively California G-funk; his bars are what jolt the songs back to the here-and-now. On “FUN!” he volunteers, in a slinky deadpan, a stark contrast between the jubilant “black is beautiful” movement and the harsh practicality of the gang life he grew up around. Staples can take the conscious route and fuck you up if necessary. –ET

“You’re classic in the wrong way”

Golden Hour’s second single was a real ’70s boogie, but its best burn would devastate in any decade. To be a classic man doesn't translate to Windsor knots and Old Fashioneds here; it means being such a tedious know-it-all that getting knocked unconscious by a disco ball would provide blessed relief for everyone else. When did Musgraves find the time to meet all our ex-boyfriends? –SA

“No, you’re not gonna get what you need/But baby, I have what you want”

The lusty title track from Robyn’s latest is steeped in its own lore as an unreleased demo, to the point that these lyrics could take on a double meaning: No, Robyn will not abide by your boring release schedule, thank you very much. Arriving far later than expected, she assures us in a few succinct lines that though our thirst may feel infinite—whether for a lover or, you know, more new music—she knows how to satisfy. –ET

No, Future did not write these lines. They’re a combination of two heavily interpolated rap classics: “La Di Da Di” by Slick Rick and Doug E. Fresh, and “Slob on My Knob” by Juicy J. But the Atlanta mainstay gave the lyrics new energy by delivering them in an inexplicably breathless, high-pitched squeak, causing some to hypothesize that he got punched in the nuts halfway through recording the verse. It’s a hilarious, extremely meme-able moment in a year somewhat devoid of rap humor. –MK

“Why do you look so good in those jeans?/Why’d you come around me with an ass like that?”

Lady Gaga has played coy about whether her A Star Is Born character’s selling-out hit is intentionally bad. But keep in mind, “Why Did You Do That?” drove Jackson Maine back to the bottle. Gaga’s theater-kid delivery pushed the song’s most inane lines to pure comedy. Like an android kid-sis to Taylor Swift’s “Gorgeous,” “Why Did You Do That?” is wooden lust via backhanded compliments, like if someone put a blonde wig on the WALL-E and directed him to Tinder. –SA

“I picked a good day for a recreational Percocet”


Was there a bad day for one this year? –SA