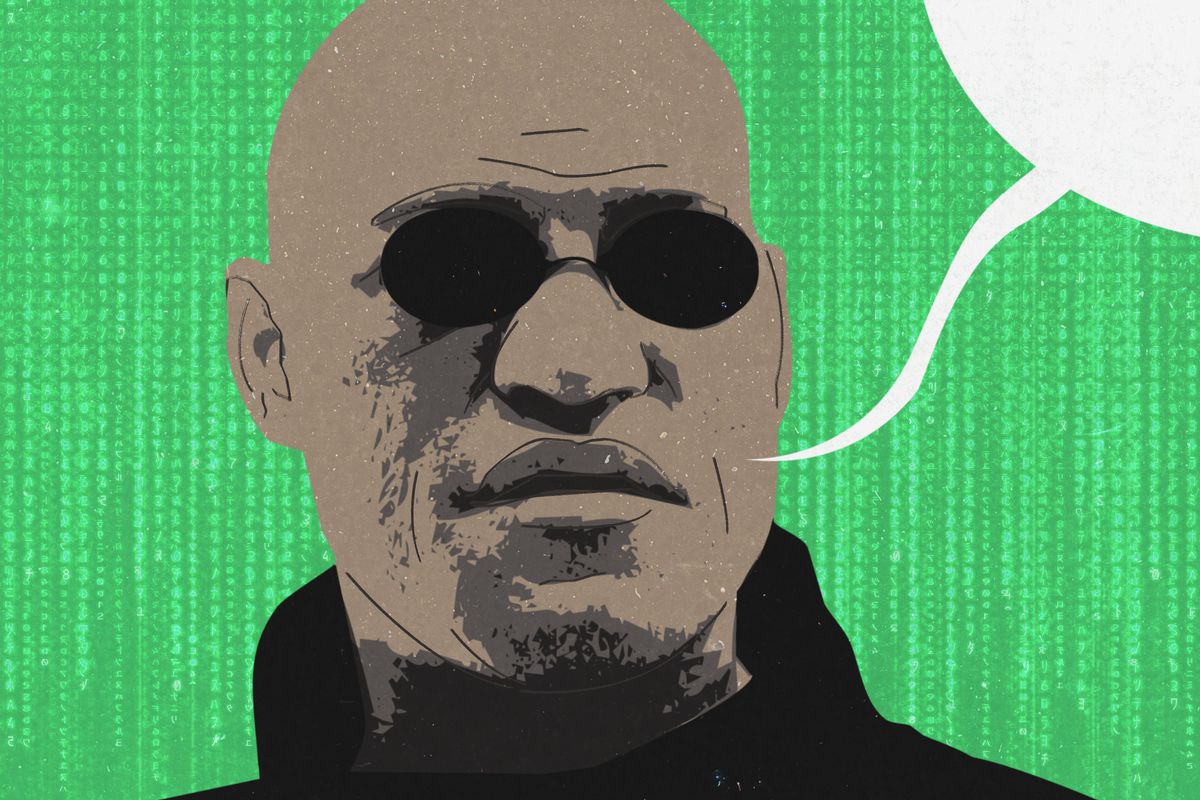 The Matrix is about a group of people dressed in interesting coats and sunglasses trying to defeat three “people” dressed in less interesting coats and sunglasses so it can, after that, defeat an entire army of machines. Early in the movie, Morpheus, leader of the group fighting the machines, has a sit-down meeting with Neo, who he believes is the one destined to end the conflict. As such, he hopes to convince Neo to join up with his group. During the scene, Morpheus delivers a monologue so smart, so nuanced, so insightful, and so well acted, that by the time he’s done with it you very much feel like, “Whoa, wait. The Matrix is real. Oh my God, we live in the Matrix.” It is, absolutely and certainly, a masterwork, and will live on forever. But is it … true?


These are the names of the people and things in the scene:

Trinity (Carrie-Anne Moss): Trinity has just a bit part here—she’s the one who delivers Neo to Morpheus—but she is integral to the movie. As a matter of categorization, she is second-in-command to Morpheus.

Morpheus (Laurence Fishburne): As mentioned, he’s the leader of the group of people hoping to defeat the machines in charge of the Matrix.

The Matrix: The Matrix is a computer-generated reality. It was created by artificially intelligent machines. They use it as a way to stimulate the brains of humans who are being grown in goop-filled pods. The machines are growing humans in goop-filled pods because they are using them to generate the energy needed to keep the machines functioning. (The people in the pods think that it’s 1999. In reality, per Morpheus, it’s closer to 2199. Sometime between the former and the latter, humans and machines went to war. The machines won. Now a small group of freed humans is trying to figure out how to defeat the machines.)

Neo (Keanu Reeves): At the beginning of the movie, “Neo” is the hacker alias of Thomas Anderson. He suspects that something larger in the world exists than what he’s experiencing, but he has no idea that his literal body is living in a pod and being harvested for energy by machines. By the end of the movie, Neo not only understands that the real world and the simulated reality of the Matrix are two different places, but also that he is (basically) a superhero in the Matrix because it’s (basically) just a video game. In the scene where he meets Morpheus, Morpheus is beginning to explain to him the idea of the Matrix.

TRINITY (to Neo, right before taking him into a room to meet Morpheus): This is it.

Fact check: Accurate. This is the moment Neo has been waiting for. He’s been searching all corners of the internet trying to figure out who Morpheus is. This is when he finally gets to meet him. It is, in a word, it.

TRINITY (to Neo, still outside the room): Let me give you one piece of advice: Be honest. He knows more than you can imagine.

Fact check: Accurate. Morpheus knows far more than Neo can imagine, mostly on account of Morpheus knowing what the Matrix is, because the Matrix—a fabricated reality inputted into the brains of humans who are actually living in pods via ports in their brains so machines can stay alive—is a fucking wild idea.

MORPHEUS (to Neo, as he walks into the room): At last. Welcome, Neo. As you no doubt have guessed, I am Morpheus.

Fact check: Accurate. Neo guessed that. In part, because Trinity told him that’s who he was going to meet, but also because, I mean, look at him. He looks like a “Morpheus.” 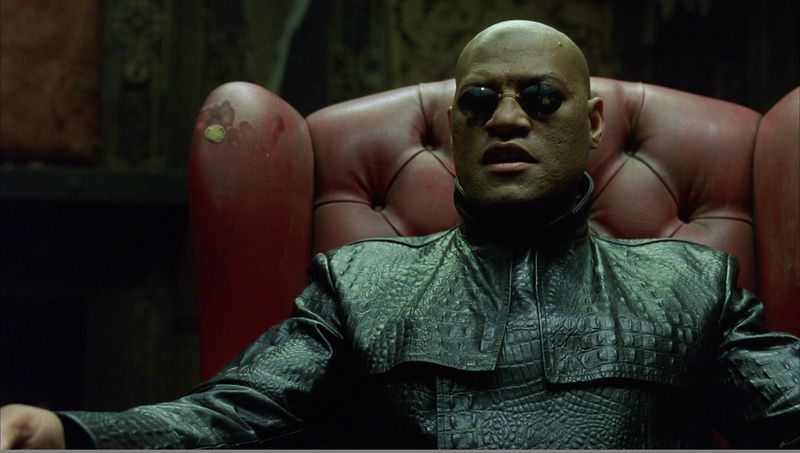 NEO: It’s an honor to meet you.

Fact check: Accurate. Morpheus is, at least within the Matrix, a world-renowned cyber criminal, and gets described by Agent Smith as “the most dangerous man alive.” Neo is a low-grade hacker who still has to work a day job to subsidize his hacker existence. Him meeting Morpheus is very much an honor. It’d be like someone who was really good at that tennis game on the Nintendo Wii meeting Serena Williams.

MORPHEUS: No, the honor is mine. Please, come. Sit.

Fact check: This one is iffy. Morpheus is saying that the honor is his because he believes that Neo is “The One,” meaning he thinks Neo is the person who is finally going to rescue all of humanity from the Matrix. But I’m on the side of people who believe it was Agent Smith who was the One, and that Neo was just a piece used by the Oracle and Agent Smith to try to defeat the machines.* And if Neo isn’t “The One,” then he’s just “Some Guy,” and that means it’s not really an honor for Morpheus to be meeting him. Let’s say this one is “conditionally accurate.”

*I had no idea this theory was a thing up until about two weeks when I started rewatching each of The Matrix movies. Now I’m neck-deep in conspiracy theories in alternate existences. It’s a way bigger commitment than I was anticipating. I just wanted to watch the scene where Morpheus and Neo fight each other, man.

MORPHEUS: I imagine that right now, you’re feeling a bit like Alice. Hmm? Tumbling down the rabbit hole?

NEO: You could say that.

Fact check: Accurate. You could say that, because Morpheus did say that.

MORPHEUS: I can see it in your eyes. You have the look of a man who accepts what he sees because he is expecting to wake up. Ironically, this is not far from the truth.

Fact check: Accurate. It is not far from the truth. Neo is, in a manner of speaking, asleep.

MORPHEUS (cont’d): Do you believe in fate, Neo?

Fact check: Accurate. Neo does not believe in destiny because he doesn’t like the idea that he’s not in control of his life.

NEO: Because I don’t like the idea that I’m not in control of my life.

MORPHEUS: I know exactly what you mean. Let me tell you why you’re here.

Fact check: Accurate on both accounts. No. 1: Morpheus is highly intelligent, so he knows what Neo means when Neo says he doesn’t like the idea that he’s not in control of his own life. And no. 2: Morpheus is going to tell Neo why he’s there. 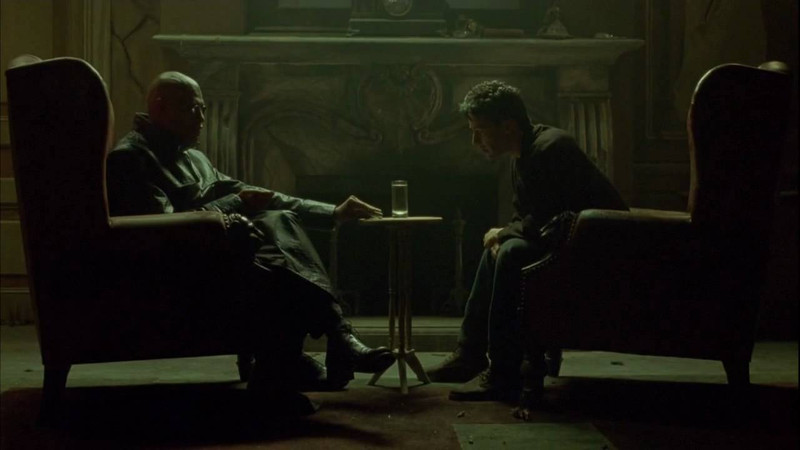 MORPHEUS (cont’d): You’re here because you know something.

MORPHEUS (cont’d): What you know you can’t explain, but you feel it. You’ve felt it your entire life—that there’s something wrong with the world. You don’t know what it is, but it’s there, like a splinter in your mind, driving you mad. It is this feeling that has brought you to me. Do you know what I’m talking about?

Fact check: Accurate. It’s the Matrix that’s making Neo feel that way, even though Neo doesn’t know exactly what it is just yet.

MORPHEUS: Do you want to know what it is?

Fact check: Accurate. Neo wants to know what it is.

MORPHEUS: The Matrix is everywhere. It is all around us. Even now, in this very room. You can see it when you look out your window or when you turn on your television. You can feel it when you go to work … when you go to church … when you pay your taxes. It is the world that has been pulled over your eyes to blind you from the truth.

Fact check: Accurate. All of those things are true of the Matrix, and it should be said again: The Matrix is an incredible idea to have come up with. Only two people in the world ever could’ve come up with that idea. Maybe three.

MORPHEUS: That you are a slave, Neo. Like everyone else, you were born into bondage. Born into a prison that you cannot smell or taste or touch. A prison for your mind.

Fact check: Accurate. Neo is, in a sense, a slave (this is in reference to his pod body). Also, the part about Neo being born into bondage is accurate as well. (He was grown by the machines. That’s why he has the ports on his head and spine and arms and whatnot.) And the part about the Matrix being a prison for your mind is accurate, as well.

But also, the prison thing is maybe inaccurate, too. Because a prison is usually somewhere that you do not want to be. And, were I to have to choose between living in the Matrix (which, sure, it’s fake, but at least it’s an Enjoyable Fake, and also: If everyone around you believes that it’s real and you are all operating under the assumption that it’s real, then wouldn’t that, in a meaningful way, make it real?) or living in the real world (which, in the movie, is some awful future where a small group of people has been driven underground and the only music is EDM and the only food is nasty mush and you’re under constant threat of being lasered to death by machines), then I would 100 percent pick living inside the Matrix every time. It just seems way better. Give me Fake Good over Real Bad.

MORPHEUS: [takes a deep breath] Unfortunately, no one can be told what the Matrix is. You have to see it for yourself.

Fact check: Inaccurate. You can tell someone what the Matrix is. It happens all the time.

MORPHEUS: [Takes out two pills, one of which is red, the other of which is blue] This is your last chance. After this there is no turning back. You take the blue pill, the story ends; you wake up in your bed and believe whatever you want to believe.

Fact check: Likely inaccurate. Morpheus truly believes that Neo is the one. Like, he really and honestly and definitely believes that. He even, later in the movie, goes so far as to offer to sacrifice his own life to save Neo. So if Neo right here would’ve decided, “Nah, this ain’t for me,” and then chosen to go back home, it seems unlikely that Morpheus wouldn’t have tried at least a few more times to convince him to join their revolution against the machines. I mean, we’re talking about the future of humanity. That’s what Morpheus believes is at stake. There’s no way he lets Neo walk. There’s no way this is Neo’s “last chance.”

MORPHEUS (cont’d): You take the red pill, you stay in Wonderland and I show you how deep the rabbit hole goes.

Fact check: This one is Literally Inaccurate and also Stylistically Accurate.

Literally Inaccurate: There, to the best of my knowledge, is no actual rabbit hole. That’d have been funny, though. Like, imagine Morpheus gives Neo the pill, Neo takes it, and then Morpheus is like, “Cool, follow me,” and then he stands up and moves his chair a few feet over and there’s a hole in the ground and Morpheus crawls inside of it.

Stylistically Accurate: It’s a good analogy. And it’s a clever callback to how Morpheus started the conversation with the line about how he imagines Neo feels a bit like Alice from Alice in Wonderland. I wonder if Morpheus planned that all out in advance? Was he sitting in his dusty, raggedy cave apartment scribbling down what he was going to say when he finally got the chance to speak with Neo? Because that’s kind of sweet.

MORPHEUS: Remember, all I’m offering is the truth, nothing more.

Fact check: Accurate. The truth. And a pill. And a new coat.

In sum, Morpheus’s monologue when he meets Neo for the first time is: Very accurate.