This is what Issy Beech of NoiseyVice thinks of Jimmy Fallon in all of four shades and then some:


1) Two sort of famous people reducing themselves to playing what is more or less theatresports written by @daquan. In front of an audience being actually forced to laugh by some off-screen producer, which frankly reminds me of a pretend sexual climax.

2) This show, this revolving door of oft-irrelevant guests, spattered with "interviews" in which Fallon laughs his silent, rocking-back-and-forth, hands-clapping laugh, at literally fucking everything, forcing his guest to play game after game like some kind of performing monkey

3) So here we are. We're all watching these videos, ten years deep into the Instagram "explore page"—and Jimmy Fallon pretends to not have known he was going to have to sing "Wheels on the Bus" in the voice of Michael Bolton shortly before doing it to perfection with a backing band—The Roots!!!!...And it just goes on and on like this: Jimmy plays basketball against a basketballer and is better than him at it; Jimmy Fallon sings a song with a professional singer for some reason; Jimmy Fallon can make people laugh as much as an award-winning comedian and writer can, watch!

4) To make matters worse, the show is literally called The Tonight Show Starring Jimmy Fallon. Starring! Who's the guest here, Jimmy? Who is it? Is it you? Are you the guest?


Surmise it to say Jimmy's a tool:


Whatever the reason, it pays. It pays as fuck, to be perfectly real with you. And I know that because sometimes I write about "The Ten Best Soundclowns on the Internet" or tell you to "Listen to This Mash Up of Linkin Park and The Seinfeld Theme Song" or some shit and let me tell you something: that's the stuff that people like to read. Google is telling me that's what we're into. Not long-form investigations into Aleppo or Manus Island, but "Here Are Thirteen Bits of Cheese That Look Like Kim Jong Il."

And so I guess that, in a dramatic turn of events, Jimmy Fallon is our fault. My fault, even. In the same way that if we hate Kim Kardashian, we really just hate ourselves. Because I'm part of that machine: Trying to keep people watching and paying attention. And Jimmy Fallon has turned himself into the human equivalent of saying to somebody "What's that!" while pointing behind them.

This meme pretty much sums it up! 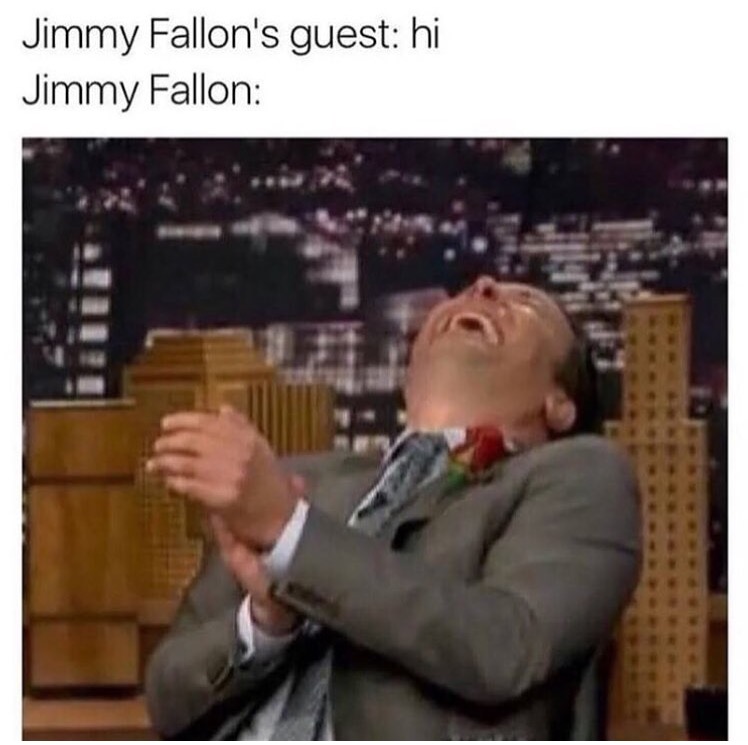 Ha ha!. Whatever you say girl, I still think Jimmy's real peach. With a boy scout face and that laugh, makes the whole act just about believable as it is...uhm....watchable.